An Early departure on Saturday from Wiltshire towing the Datsun for qualifying at Snetterton in the CSCC Swinging Sixties combined grid race a total of 45 cars to start. 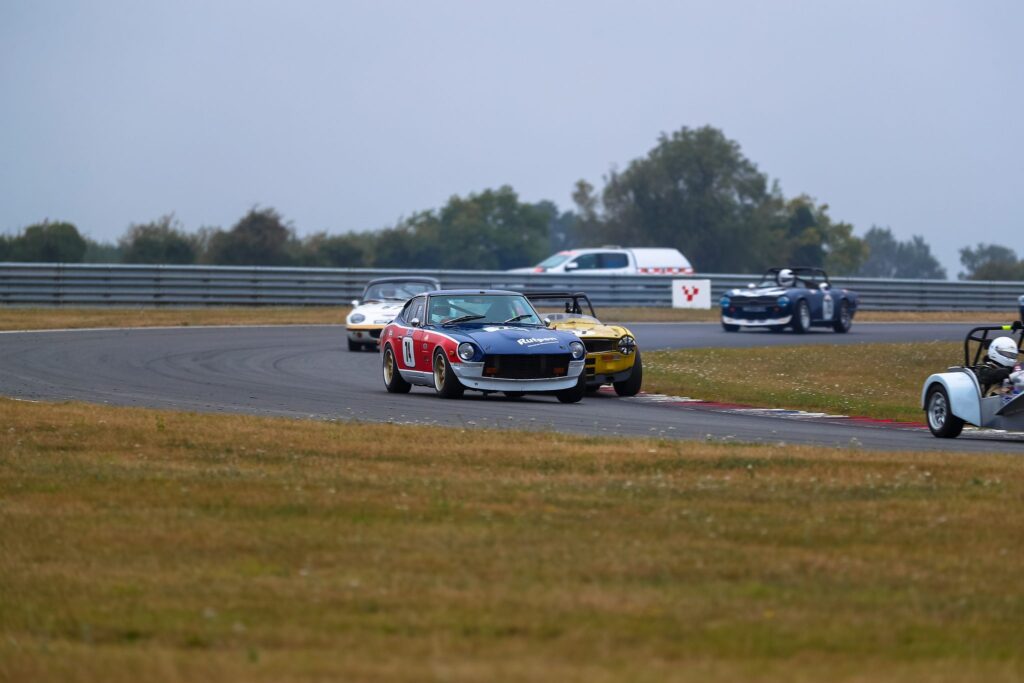 We encountered a few delays on the way and arrived to find the timetable had been advance half an hour. After about 15 minutes frantic unloading, tightening wheel nuts final checks and changing, we were out 8 minutes late for qualifying on a circuit never driven before.

Dave mentioned “I found my way around the busy track and managed to put in a reasonable time just before the rain came, came into the pits to find we were a surprising sixth on the grid”.

We watched some great classic car racing in the afternoon then formed in the collection area & out for a rolling start. The Datsun got away well and managed to get inside the 5th place car into the harpin, then passed the 4th place car on the back straight. So running 4th after the first lap was a great start, but the three lead cars were already showing their form and leaving the Datsun behind. Then about 5 laps in the lead car broke a half shaft and was stranded in a dangerous position, safety car out for 4 laps, after some terrible pit stop strategy the Datsun was now in 8th position with many lapped slower cars also in front. Racing again the Datsun really switched on, lap times falling and starting to move up the field, final lap was a frantic scrap with a V8 Sunbeam Tiger, the Datsun took the place with the bigger Tiger faster on the straights it was a chase to the line with the Datsun crossing the line 2nd just 0.1S in front of the Tiger.

So overall a great result, but very short lived, following a stewards inquiry Dave was found to have a yellow flag infringement whilst the safety car coming out on circuit, so found to be disqualified.

A great race and lessons learnt… get up earlier & follow the rules!